When we first looked at this house, one of the many things that made us fall in love with it was the basement. It sounds crazy, I know, but the basement was huge and finished. It had nooks and crannies and just so much space. We could instantly imagine a bedroom, my crafting area, and a family area. We had huge plans for it. Of course, we moved in and my pregnancy took charge of our lives, so most projects got put on hold. With the basement, that meant that boxes kept getting shoved down there. The general areas were defined, but there wasn’t any walking room, which is impressive in itself considering just how ridiculously big the space is. 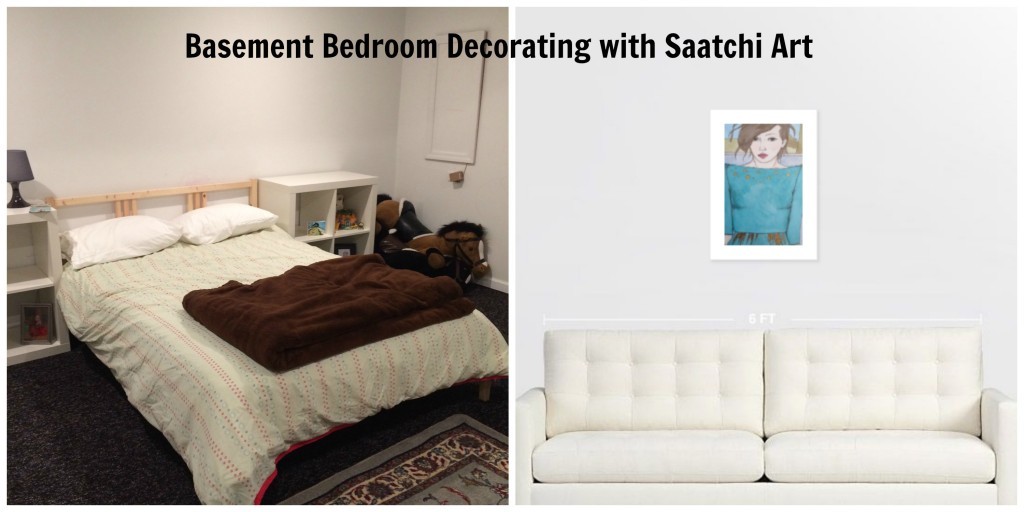 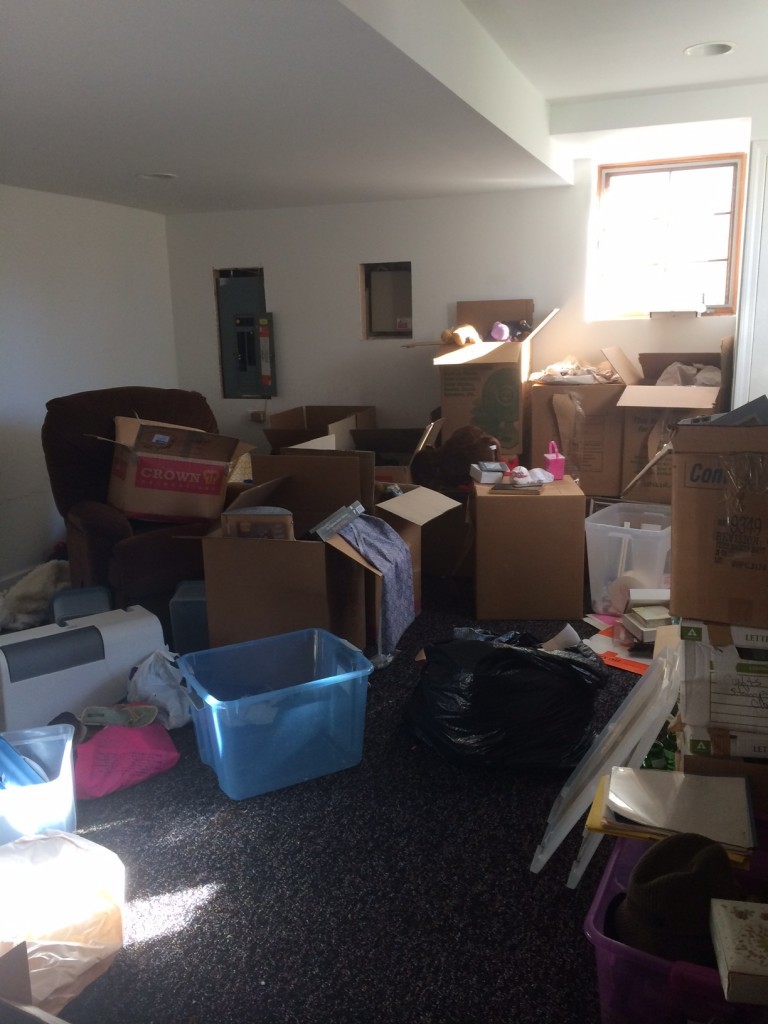 We had family visiting over Thanksgiving and needed the space. It was the perfect reason to finally clean everything up. It’s hard to put into words just how disgusted I was with the amount of *stuff* we had. We had boxes in there that hadn’t been opened since we moved from New Zealand six years ago. In some ways, going through boxes was a lovely trip down memory lane, but I was surprised at myself at how little I ended up keeping. I lost track of how many trash bags we put out. We had two large donation pick-ups out of it, too. 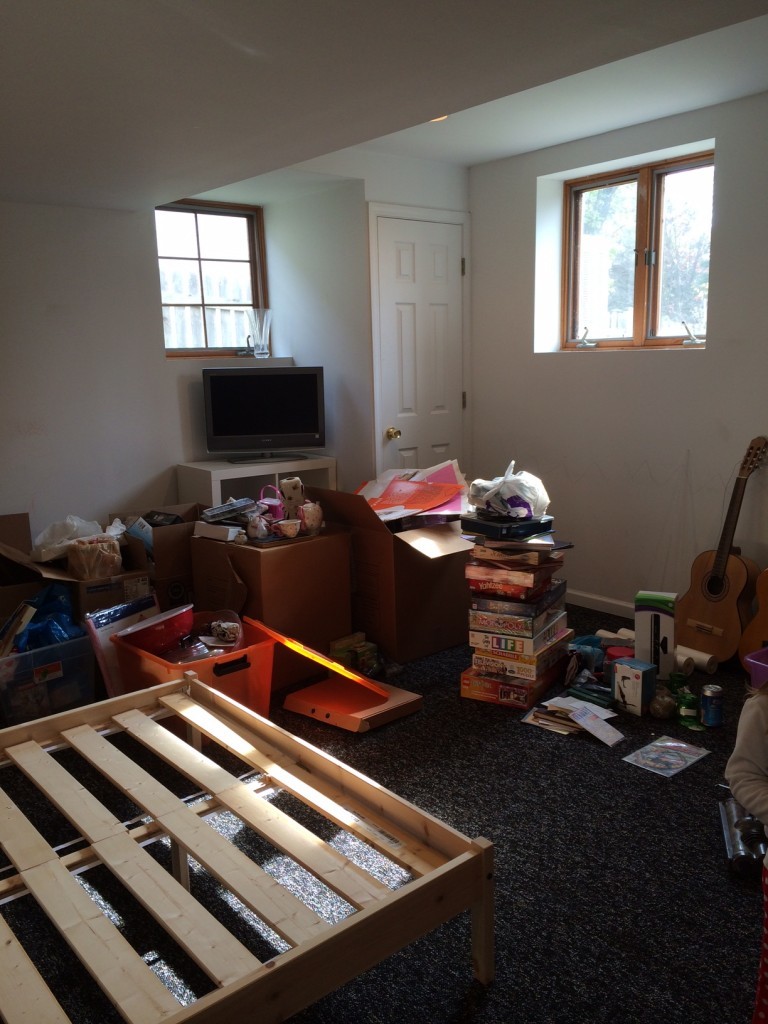 I sent Scott a lot of pictures of items that I found. Sometimes it was just a fun memory. Sometimes it was to ask what he’d like me to do with it. I ended up taking photos of a lot of things and tossing the actual item. If it was going to go right back into a box, I didn’t want it. I only wanted things we were going to use in some way or that were just so special to us that neither of us could stand to lose it. 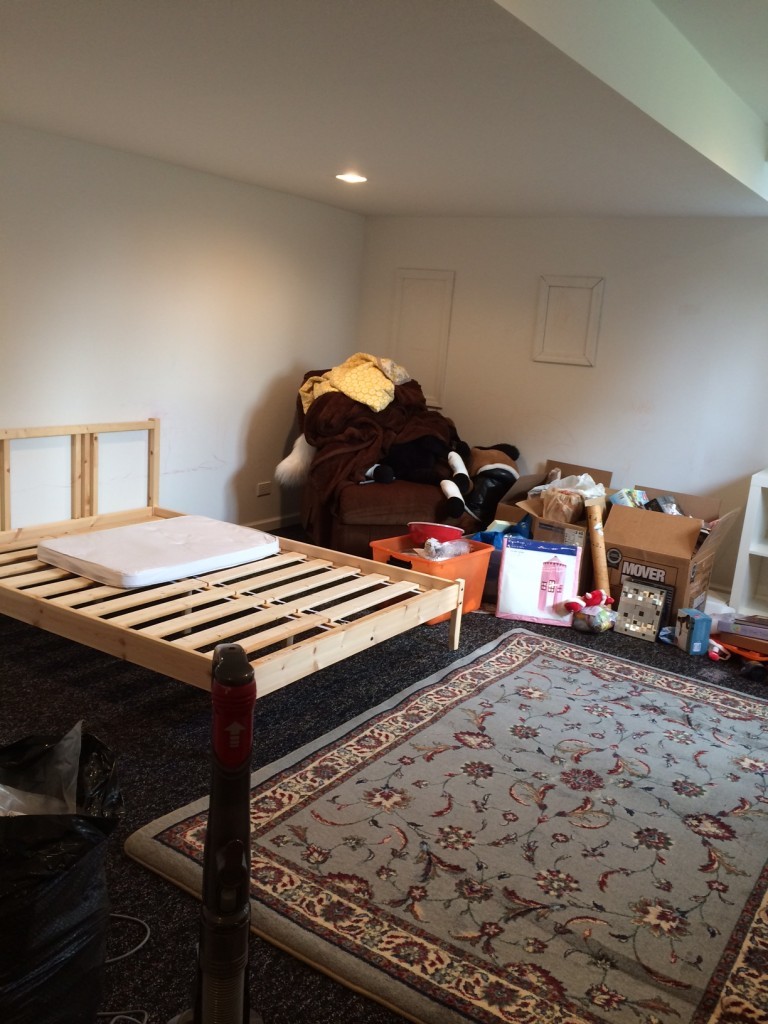 I loved seeing the progress in this room. It was nerve-wracking, too, though. It was such a blank slate. The walls all need to be painted because of an early episode involving Gould Girls and crayons. I know that I want it to be an inviting space, so I want some nice artwork on the walls. Deciding on colors and looks is really difficult for me when I don’t have a starting point or any idea what something will look like on a wall. I have a hard time envisioning that kind of thing. 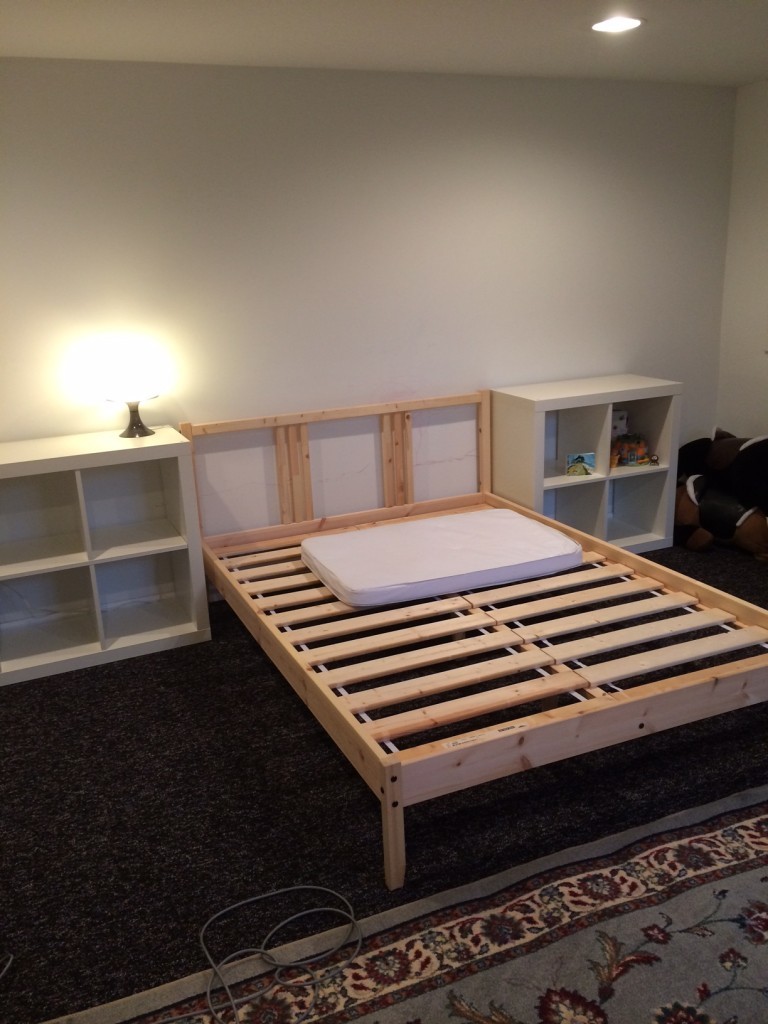 I found this really neat feature on Saatchi Art. I knew that I wanted to incorporate white and gold into this room. I was looking on their site for artwork and found a piece I loved that had the gold I wanted, but that pop of color I’m always after, too. Girl in Blue and Gold by Kitty Cooper spoke to me, but I really had no idea how it would fit with the size of the room and the furniture I had. 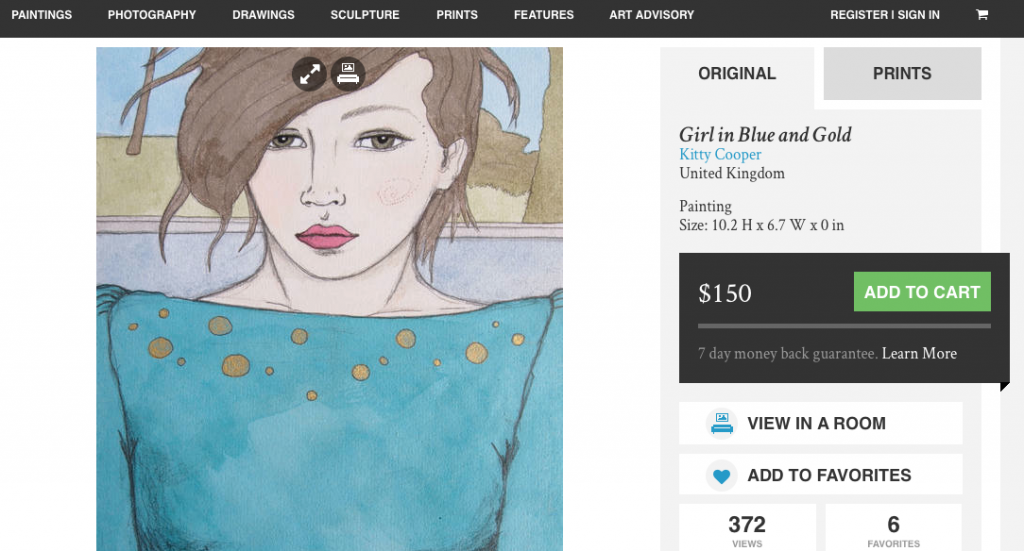 If you click on “View in a Room“, the site brings up a room with the furniture measured so you can get a sense of how the piece of art will look in the space you’re thinking about. 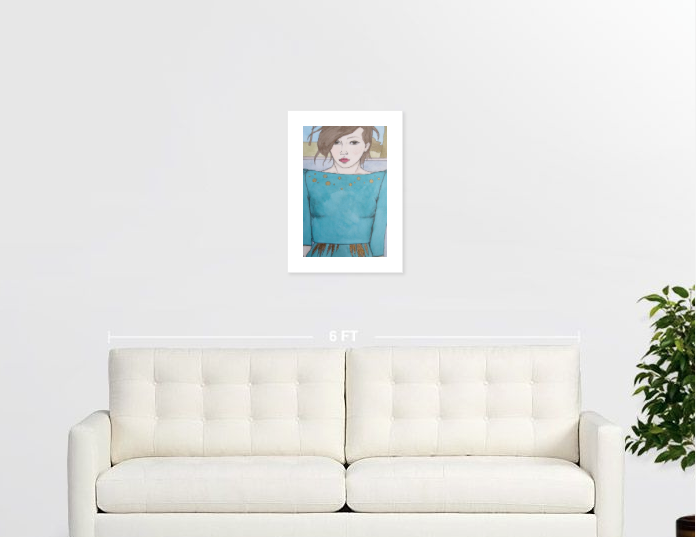 This is the coolest thing ever to me. I’ve literally spent hours playing with all of the different artwork on the site and dreaming up places to put all of it in my house. It started with the basement bedroom, but has moved into an “Ooh, that’s nice! I wonder how it would look in the living room?!” thing. I toddle off to measure the space, pull up view in a room, and have a good idea of what it would look like. The biggest issue for me now is to decide on what to get! 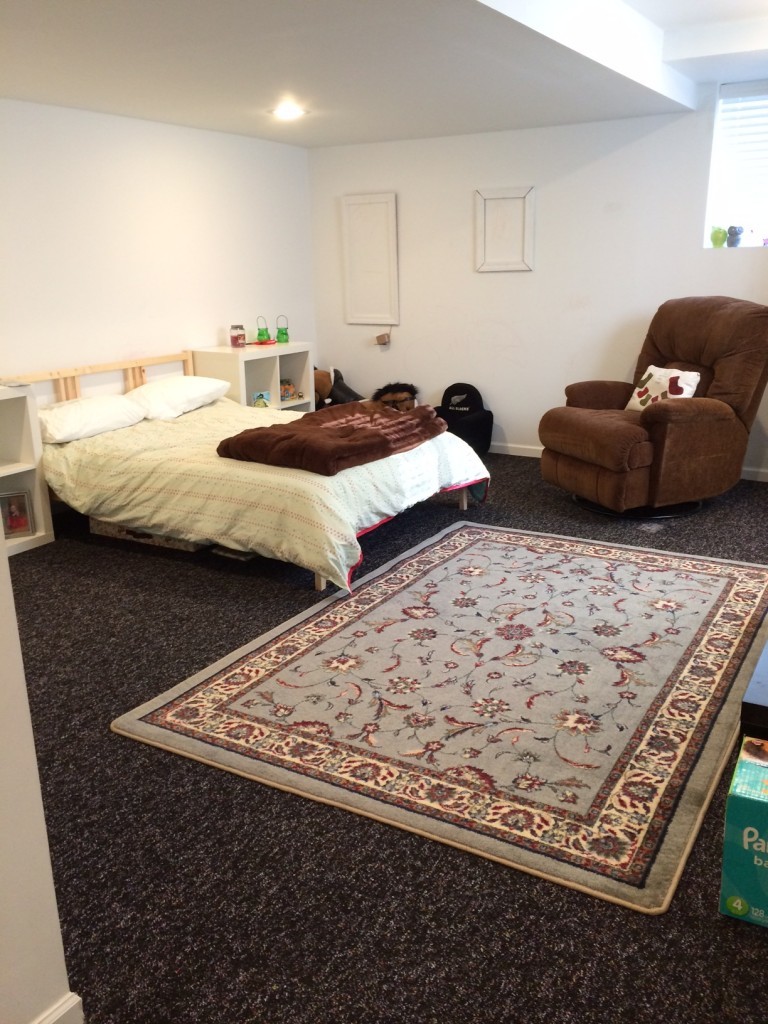 My basement bedroom is a total blank slate. What would you do with it? Would you stick with Girl in Blue and Gold or go with a different look? I’m excited to see how this room develops!